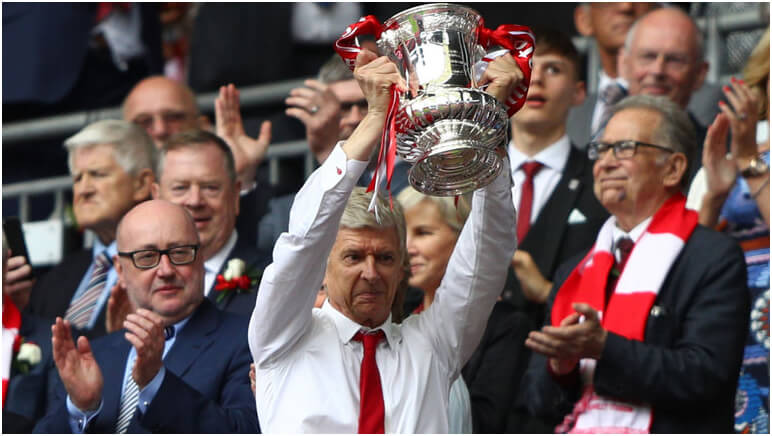 Arsenal won 2-1 against Premier League Champions Chelsea for Arsene Wenger to secure a record seventh FA Cup title in his 21st season as manager of the club.

The Gunners began with all guns blazing at Wembley as Alexis Sanchez scored the opening goal after only four minutes, when referee Anthony Taylor overruled his assistant after he had been flagged for offside against Aaron Ramsey, although Chelsea also complained that Sanchez had handled in the process.

While they had some right to rue that particular decision, they would have none as Victor Moses was correctly sent off by Taylor in the second half after receiving a second yellow card for diving.

As Arsenal dominated the game for long periods, they remained unable to capitalise on their chances as Danny Welbeck and Ramsey both found the woodwork, with Blues defender Gary Cahill also contributing perfect clearances that helped Chelsea stay in the game.

Chelsea striker Diego Costa then equalized as Arsenal keeper David Ospina failed to keep out his deflected shot with 14 minutes left to keep a domestic double in sight for the Premier League winners.

However, Arsenal were not one to be denied as Ramsey — who had scored the FA Cup final winner against Hull City back in 2014 — did it again with a header as Olivier Giroud’s cross found him free.

And as the final whistle sounded, Arsene Wenger would decorate a season of heavy criticism with a record 13th FA Cup win for Arsenal— and a record seventh for the Frenchman.

His team had not been favourites against Manchester City in the semi-final as well as here in Wembley — a point Wenger used to pay further tribute to his team.

“You cannot get two tougher opponents, but we produced two outstanding performances,” he said. “That is what makes me particularly proud, because no one gave us a chance at Wembley and we responded with attitude and class.”

“We had an outstanding performance from the first minute onwards. This team has suffered, but they’ve united and responded. They showed strength and unity and played spectacular football.”