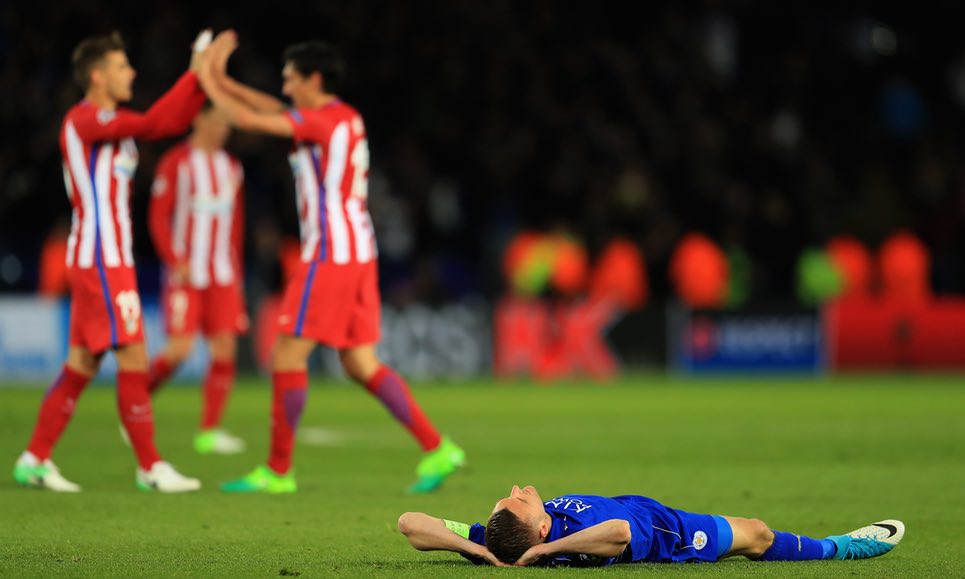 Atletico Madrid put an end to the Leicester City dream by drawing 1-1 against the Premier League champions at the King Power Stadium.

Saul Niguez gave Atletico a commanding away goal lead with a beautiful header after 26 minutes, pulling the La Liga giants far ahead.

The Foxes, needing at least 3 goals to advance, switched to a more attacking-minded formation with a 3-man line up front.

Anyone would have allowed the Foxes to concede at that point, but instead Craig Shakespeare’s changed for a more attacking approach on half-time with Ben Chilwell and Leonardo Ulloa coming on for Shinji Okazaki and defender Yohan Benalouane, helping Jamie Vardy with greater offensive support.

Even after Vardy tucked in Chilwell’s deflected shot at the hour, Leicester kept their pressure unto the end. However, Atletico only needed to put up their trademark defense to keep them out, and thanks to a controversial penalty goal advantage from the first leg as additional cushion they advanced without much fuss.

While the disappointment amongst home fans would have been obvious as they see their team exit Europe, it was not shown as Leicester players were paid a standing ovation. Even opposition manager Simeone had been effusive in his praise for Shakespeare’s smart tactics shift in addition to making his business to approach every single Leicester player and shake his hand.

In the meantime, his Atletico squad would progress to what will be their 3rd Champions League semi-finals in four years, with their next opponents to be determined this Friday.