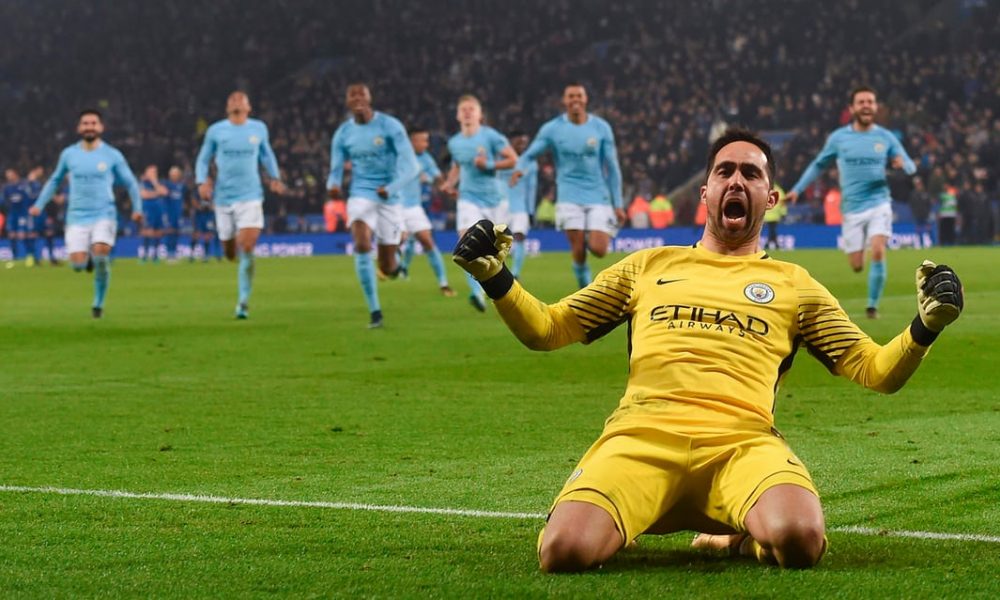 Manchester City has reached the semi-finals of the Carabao Cup following a penalty shootout victory over Leicester City.

City’s keeper Claudio Bravo, who saved two penalties in the previous round against Wolves, was the hero for City once more as he kept out Riyad Mahrez’s effort.

The home side had taken the game into extra-time and then penalties after scoring after Jamie Vardy slotted home a penalty, awarded when Demarai Gray was harshly adjudged to have been brought down by Kyle Walker.

“What I liked the most is how we reacted and overcame that situation,” City coach Pep Guardiola said. “It is a good indication for the future.”

However, while Guardiola is happy to secure a place in the semi-finals of the Carabao Cup and extend their unbeaten domestic run to 27 matches, he ruled out any possibility that his squad could pull off an quadruple.

“That is not going to happen. Of course not,” the former Barcelona and Bayern Munich coach said. “Come on, that isn’t real. What we’re living isn’t real. The situation of winning 16 or 17 games in a row in the league and qualifying for the Champions League before we finished the group stage and now we’re here playing with a lot of young players, that is not normal.”

Both teams were fielding second-string sides at Leicester’s King Power Stadium, although City winger Bernardo Silva scored the opener in the first half by slotting home his second goal of the season following Ilkay Gundogan’s powerful run from the halfway line.

Earlier, Arsenal had also made it through to the League Cup last four by beating West Ham, while Chelsea host Bournemouth and Manchester United travel to Bristol City on Wednesday.

The draw for the semi-finals is scheduled to take place after the latter game, with the two-legged home and away semi-final ties set to be played in January.