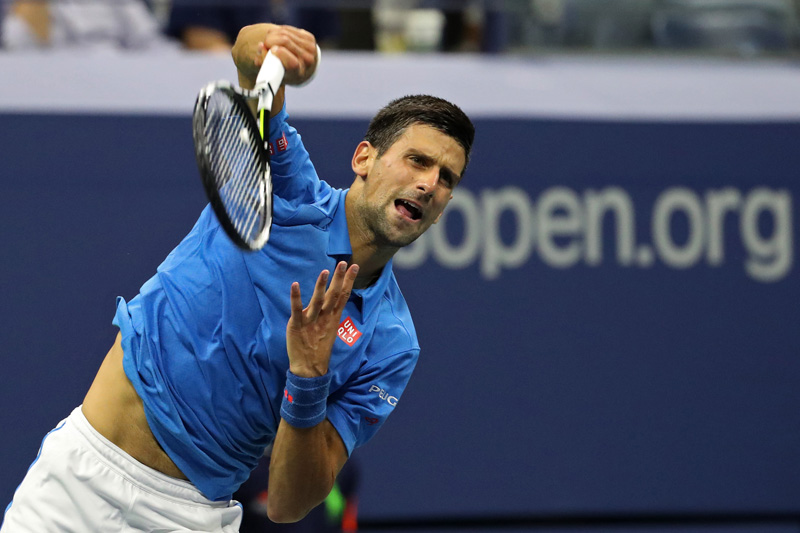 Novak Djokovic eases into the semi-finals of the US Open after Jo-Wilfried Tsonga became his third opponent who was unable to complete a match.

The Serb has been struggling with wrist and arm injuries, and benefited from a walkover and an early retirement from two opponents in New York, but there were few signs of vulnerability against Tsonga.

The Serb had won 13 of their last 14 matches, stretching back five years.

Tsonga had fleeting chances in the first set, missing a backhand on break point in game five and clinching a break when Djokovic snatched at a volley in game seven.

But with three double faults and an awkward backhand the Frenchman looked feeble in his serve, going three breaks in a row and fell 5-3 behind.

The Frenchman then committed 19 unforced errors and failed to win a point on his second serve, as a calmed Djokovic took the opening set in 35 minutes. Tsonga’s predicament then took a turn for the worse when he requested medical attention to his left knee after falling a double break down in the second set.

Djokovic sealed the second set with an ace and with Tsonga unable to push up when serving, the ninth seed approached the net and held out his hand to bring an end to the action after just 81 minutes.

This meant that Djokovic is into the semis after having completed just two out of five matches in New York, benefiting from a walkover and two retirements. He will be up against another Frenchman in the last four, after Gael Monfils won against fellow compatriot Lucas Pouille 6-4, 6-3, 6-3.