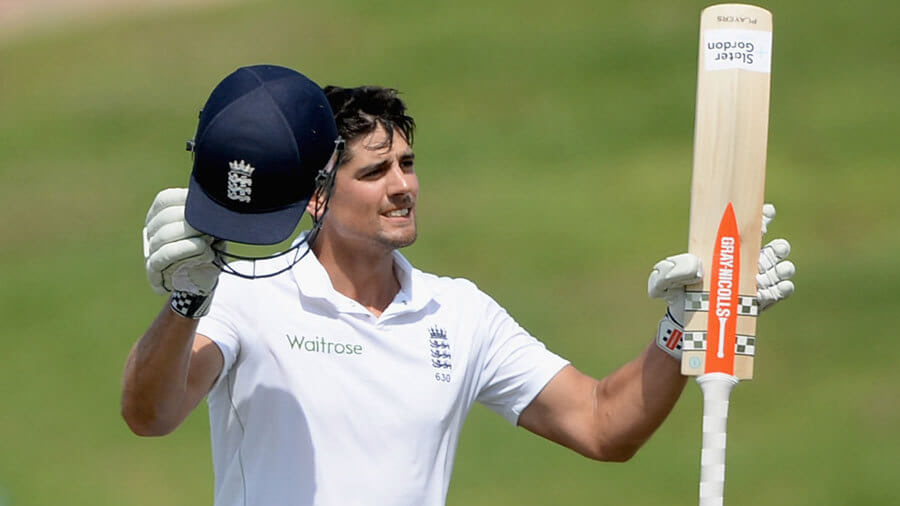 England’s Alastair Cook has now scored a Test century in all nine countries he played in.

It was an uphill battle, but a resolute Captain Alastair Cook leads England’s reply with a splendid unbeaten 168 in the first Test in Abu Dhabi.

On Cook’s watch, England ground along to 290 for 3 by the close, a position of relative serenity given their travails in the field on the first two days.

The bulk of his work was split between two century partnerships, first with Moeen Ali, who was a qualified success in his first outing as a Test opening batsman, and then with a hard-grafting Ian Bell, who eventually found his feet, and his footwork, after a horrifically jittery start before slashing at a wide one from Wahab Riaz in the closing overs of the day.

He batted throughout the third day but England lost two wickets in three overs late on as they closed on 290-3, needing 34 more to avoid the follow-on.

Those two wickets for four runs boosted Pakistani spirits on another day when bat dominated ball, on a soporific surface which has been widely criticized.

Cook’s 28th Test century was typical of so many of his previous 27, founded on patience, discipline and excellent shot selection.

His approach was unaffected by the departure of Moeen, who was caught behind for 35 pushing at Rahat Ali shortly before lunch to end a patient first innings as a Test opener.

Cook had made 147 by the time he offered a chance, substitute fielder Fawad Alam dropping a tumbling effort at backward square-leg off a top-edged sweep.