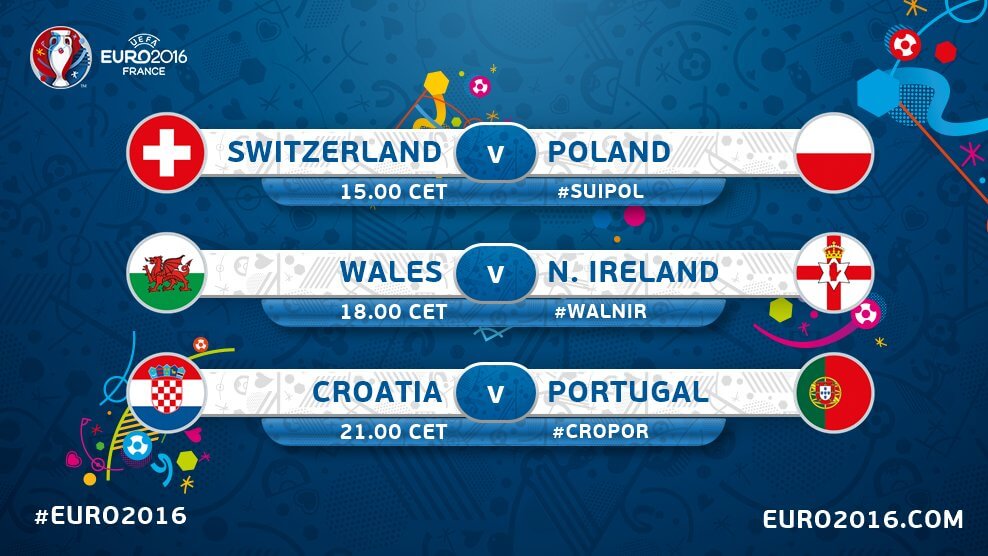 The matches for Euro’s round of 16 have been decided and will kick off this Saturday. Here are the predictions for this weekend clashes.

Thus far, the Polish defense is the only formation capable of keeping everyone, even world champions Germany out. Though their attack could be underwhelming, they goal tally is right on par with Switzerland, who conceded once in a 1-1 draw against Romania. A slight advantage for Poland, although extra time can be expected.

After England vs Wales, this is another match that pits British Isle nations against each other. Still, Wales almost certainly holds definitive advantage with the sparkling forms of Gareth Bale, Aaron Ramsey and Joe Allen that won them a rout against Russia. Should Northern Ireland not shape up on defense heavily they certainly will face the same situation; but in the very least, both teams do share the same team spirit and fan support that carried them forward during hard times.

Croatia looked strong after emerging top of the group and above defending European champions Spain. Their comeback win against the odds-on favourite made them one of the favourite teams right now in the tournament. Additionally, Cristiano Ronaldo and Portugal are struggling to find form and had been unconvincing in defense. This could be an easy one for the Croatians and Luka Modric, who was seen returning to training.

Ps. If rumours of Modric helping out against the Sergio Ramos’s penalty were actually true, there is every chance that Croatia’s star midfielder could give pointers against Ronaldo too.

France vs Republic of Ireland

With so much at stake in the knockout stages, there is hope for France that the pressure could get them so that they would perform much better in the group stage, than depend on late goals clinch results. But the odds are certainly against the Irish who needs all the Irish luck they could get against the host nation.

Germany looked a shadow of their World Cup winning side, but when they had included Mario Gomez up front they were formidable once more. They potentially face a hard defense team against Slovakia in what could be the same scenario they experienced in the group stages. However, the talents that Jogi Loew’s team boasts is simply as undeniable as the coach’s sniffing habits are gross.

Hungary’s performance in the group stages went startlingly well. Their collective spirit brought them a win against Austria, and a thrilling 3-3 draw against Portugal – achieving the latter even when most of their main players were sitting the game out. But they face a hard foe against Belgium, who boasts talent but lack the ability to turn it into results. Their slim win against Sweden is proof enough.