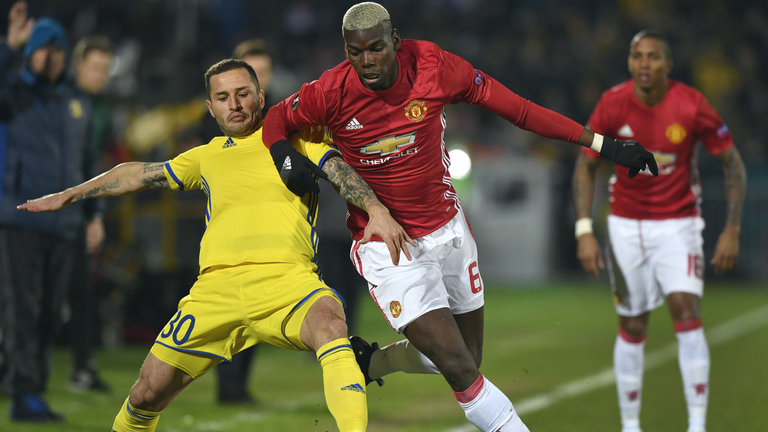 Manchester United was held to a 1-1 score by FC Rostov in the first leg of their Europa League last-16 tie in Russia, but claimed an important away goal advantage thanks to Henrikh Mkhitaryan.

The Red Devils faced a hard 3,750 mile to the Olymp-2 Stadium — which pitch conditions were criticised by United manager Jose Mourinho before the match. It was a tricky combination of high bounce, uneven turf and loose soil that could scatter whenever a pass was made.

The toll showed on the players as they could only produce a lacklustre showing in the first 30 minutes, but they got their goal as a fluid move began when record signing Paul Pogba turned infield and found Phil Jones.

The Englishman then swept the ball to Marouane Fellaini and the Belgian’s chested past a marker. When he recycled possession to Zlatan Ibrahimovic, the Swede’s pass to Mkhitaryan allowed the Armenian to beat keeper Nikita Medvedev with ease.

The former Swedish international himself then fired over the crossbar in the second half, before Rostov forward Aleksandr Bukharov pounced on to Timofei Kalachev’s pass for the equaliser. Both sides then registered chances but failed to convert them before the final whistle sounded.

“We have tried to win, we have played as good as we could on this pitch,” Mkhitaryan said after the game. “I do not want to speak about the pitch because it was awful for both. For those watching it was not a very interesting game.”

Mourinho, on the other hand, was far more optimistic about the result.

“l remember as a kid some matches like this in Portugal – non-league and amateur pitches. To see my players coping with it and the humility to fight for every ball is a good feeling for me.”

“(Now) We have an open result for the second leg with a little advantage for us. (And) There are no injuries.”

Manchester United would play Rostov again in the second leg next Thursday, this time at the considerably superior conditions at Old Trafford.