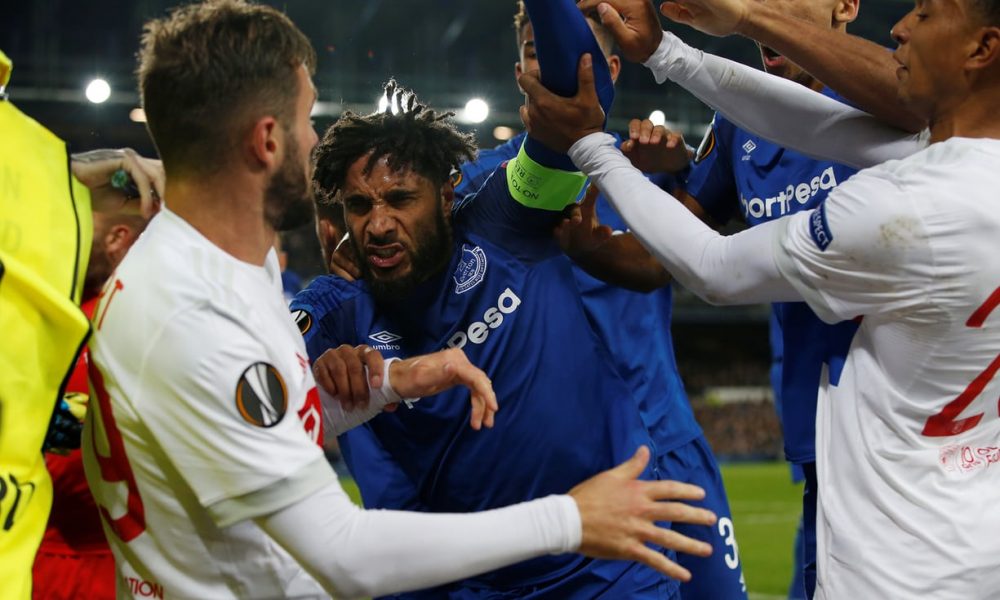 Everton’s poor start to season continued with a 2-1 defeat at the hands of Lyon in the Europa League, with the game descending into a melee in the second half following an ugly brawl sparked by the captain Ashley Williams.

Lyon — who, like Everton were without a win in Group E — took the lead inexplicably just after six minutes through Nabil Fekir’s penalty, awarded for Mason Holgate’s rash and ill-timed challenge on Fernando Marcal.

Then, a second-half flashpoint which could see Everton and Williams facing punishment came, as Williams’s shove on the Lyon goalkeeper, Anthony Lopes, sparked heated confrontations between players in front of the Gwladys Street end.

The match was held for a couple of minutes as the group melee surged to the direction advertising hoardings, with a supporter holding a child in one arm spotted aiming a punch in the direction of the keeper.

Afterwards and seemingly roused by the clash, Williams headed a perfect free-kick cross delivered by Gylfi Sigurdsson to turn from villain to hero from six yards and equalized.

Sigurdsson came close again moments later with a second free kick that hit the inside of a post, but Lyon responded and extinguish any hopes of an Everton revival. As Maxwel Cornet turned back a ball across goal from the right-hand byline, a slight flick from Bertrand Traore in the middle was enough to secure all three points for the Ligue 1 club.

The defeat, which comes after a 3-game winless streak despite a huge amount of summer transfer activity amounting to well over £100m for the Toffees, further calls into question the future of coach Ronald Koeman with the club.

“We made too many mistakes,” the Dutchman said after the game. “It was thanks to Jordan Pickford that the score was only 2-1. We started well but made a really stupid fault after just five minutes.”

“I have no complaints, it was the right decision from the referee to give a penalty, but there were a lot more mistakes and bad decisions after that. That’s what we are looking at the moment: doubts, errors, and players without confidence. I know from my playing days what that does to you.”

“The final decision is by the board not myself,” Koeman then added regarding his position. “If the board thinks I am not the right man they will tell me.”