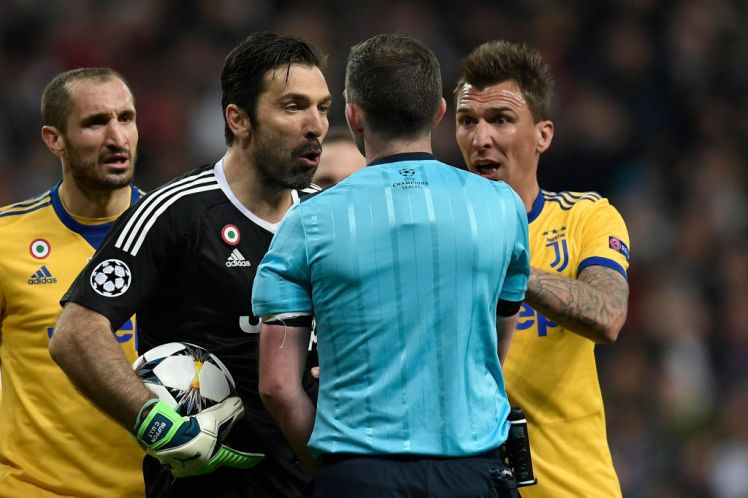 Juventus captain Gianluigi Buffon says that he stands by the comments he made about referee Michael Oliver after their dramatic Champions League quarter-final exit to Real Madrid.

The 40-year old was sent off for dissent after Oliver awarded Real an injury-time penalty, and later said the official had “a trash can for a heart” after Juve had come back from losing 3-0 at home to lead 3-0 at the Bernabeu in the second leg of the last-eight tie on Wednesday.

However, Oliver awarded the Spanish side a 93rd-minute penalty for Mehdi Benatia’s foul on Lucas Vazquez, which Cristiano Ronaldo scored to send Real through 4-3 on aggregate.

Buffon said after the game that it was a “dubious incident” and, speaking again on Saturday, he said he had been defending “my teammates and fans, even in a not very composed fashion”.

“The content remains and I stand by all of it,” the keeper said. “I’d say them all again – maybe with a different type of language.”

“You find a way to speak, right or wrong, that at times can seem excessive – but this is me, I am Gigi Buffon.”

He added that he still believed 33-year-old Oliver lacked experience.

“I’m sure Oliver will have a great career in future, but he’s too young to officiate a match like that. A referee with more experience would not have blown his whistle and decided not to become the protagonist of the match. He would have left it running, turned around and let the two teams fight it out in extra time. Let the pitch do the talking.”

Police are currently investigating threatening text messages sent to Oliver’s wife, Lucy, after she was abused on fans on social media.