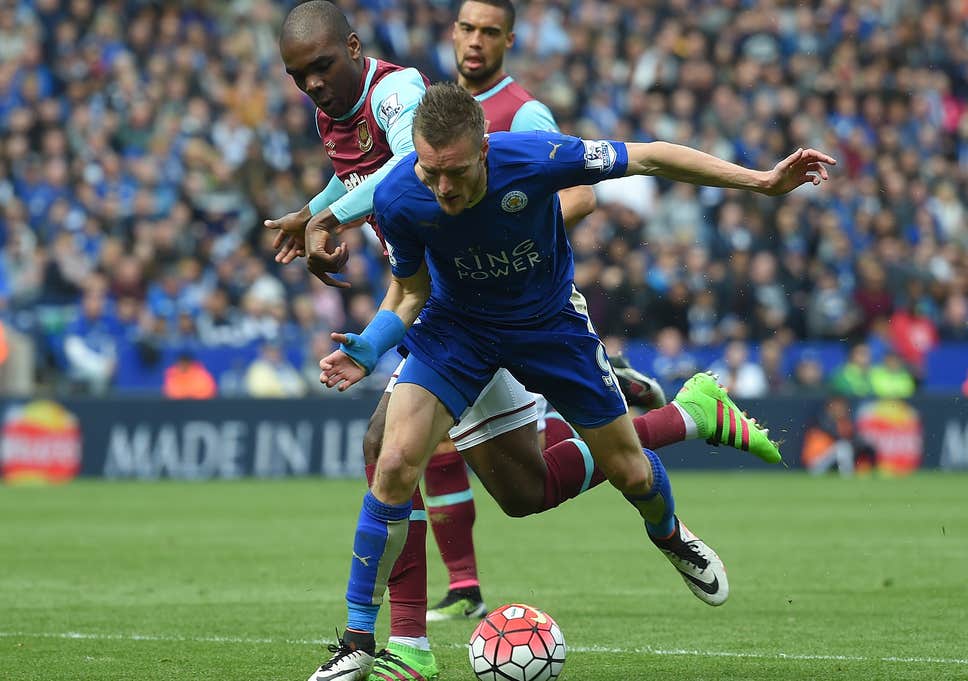 t was hardly a routine day for Leicester City in their quest for a fairy tale Premier League title this season. The Foxes saw two penalties in a single half of one game against West Ham United, and were forced to a dramatic 2-2 draw in front of their tremor-causing home supporters.

But to begin the narration, one would need to begin with the curious case of Jamie Vardy’s red card. The English top striker made a crisp finish following a fast break, netting his 22nd goal of the season to equal Harry Kane’s record.

And no one would argue that his second yellow card was deserved; referee Jon Moss made the right call as Vardy clearly went into Angelo Ogbonna, falling theatrically as his legs tangled with the defender’s. It was the first; almost everyone saw that Vardy hardly touch Cheikhou Kouyat – the yellow was perhaps a warning too harsh.

Leicester held on regardless, but things looked hardly looked optimistic for the Foxes as Andy Carroll slotted home to end Leicester’s run of 574 minutes without conceding a league goal and Aaron Cresswell looked to have opened the door to the Tottenham with a stunning left-footed finish two minutes later.

In injury time and perhaps in the spirit of being balanced, another controversial decision when he pointed to the spot once more after Carroll made the lightest of contact with Jeff Schlupp.

West Ham clearly felt Moss had evened things up after earlier decisions in their favour, but Ulloa was not concerned as he took the chance to secure what might yet be a vital point – although Leicester will be without Vardy for next weekend’s home game with Swansea.

Even then, they will be wary and looking behind their shoulders. Tottenham could very well gain on them with their game in hand against Stoke. Furthermore, as Spanish giants Barcelona had demonstrated over the course of the past few weeks, no one is above a very bad fumble.

But that as it may, when comparing the number of complaints, this season’s Premier League sufferers Aston Villa will have plenty more than Leicester City but deserve none.

With their defeat at the hands of Manchester United and the single Marcus Rashford goal, an atmosphere of sadness and recrimination shrouds every single Villa supporter in Old Trafford.

Their first relegation in 29 years, Aston Villa is now left with four pointless matches to play after their ninth straight loss which saw them lagging behind with 15 points from safety.

Caretaker boss Eric Black experienced relegation from the Premier League at rivals Birmingham City, and knows how difficult it will be to bounce back.

“The physicality is different to the Premier League and we are a big, big fish in that division,” said Black. “I don’t think anybody is under any illusion this is going to be plain sailing.”

“But I’m sure there will be a thousand people who will want to sit in that (manager’s) seat,” Black added. “I don’t know how many clubs would have 30-35,000 coming to games when they have hardly seen a victory.”

“We need to rebuild the team into something the supporters can be proud of.”