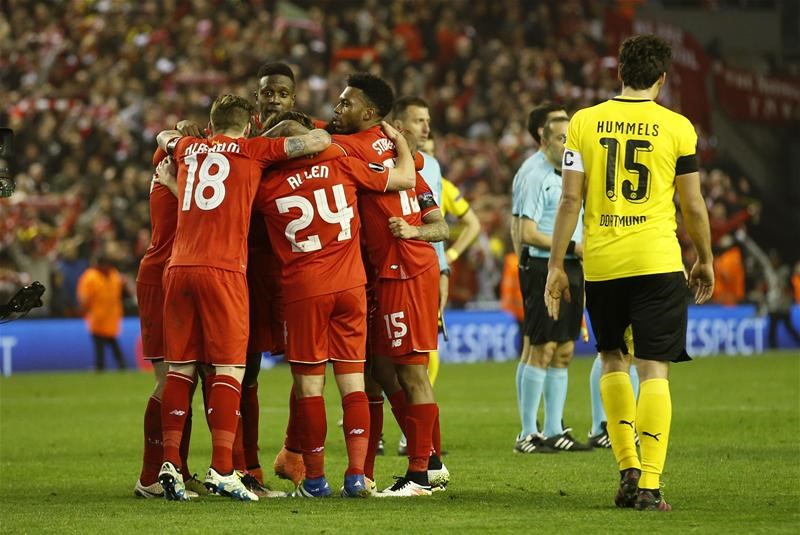 Liverpool made it through the semi-finals of the Europa League as they beat Borussia Dortmund by 4-3 in a miraculous comeback within a match startlingly reminiscent of that night the Reds triumphed over AC Milan in Istanbul.

But the Kop had displayed apparent problems, as they conceded two goals against the German team in just 10 minutes from the start. Liverpool began attacking at such a pace they seemed to forget their opponents also have a reputation for quick counters after winning back possession.

One word to sum them up was overeager, as Philippe Coutinho and Alberto Moreno lost the ball high up the field on the left on their first real foray forward, and from that unpromising position Dortmund advanced all the way downfield to take an early lead through Henrikh Mkhitaryan.

And before Liverpool had even waked up to the fact, Dortmund hits another as an inspired Marco Reus passed to the effect of a firm finish by Pierre-Emerick Aubameyang after Roberto Firmino had lost possession.

It was 2-0 after just nine minutes, and Anfield went silent.

Liverpool’s Divock Origi then made a point for starting in the place of Daniel Sturridge by slotting one in early in the second half through the legs of opposition keeper Roman Weidenfeller. But it seemed a waste of effort as Marco Reus made a cool finish in the 57th minute.

They need at least 2 goals in less than 33 minutes left and everyone in a red shirt knows it. Philippe Coutinho stood up to the call, roused the home crowd with a brilliant string of passes then curled it in low and into the net from 25 yards out. 34 minutes left, Liverpool-2, Borussia Dormund-3.

Mamadou Sakho then equalized for Liverpool as the French defender rose up from the back to head in the ball into the net at the near post. Jurgen Klopp was wound up to the point of frenzy, turning around to the crowd beneath Anfield’s directors’ box, whirling his arms in encouragement and gesturing wildly for more vocal support.

Then, the climax came as Liverpool rolled it as James Milner swung a beautiful cross for Dejan Lovren, and the Croatian defender heads it in. Dortmund’s brilliant start ended up being blown away by a rousing European comeback, as glorious attacking honored both clubs and the often mocked Europa league.

Indeed, Anfield had seen many great nights, but this can be added to the list.