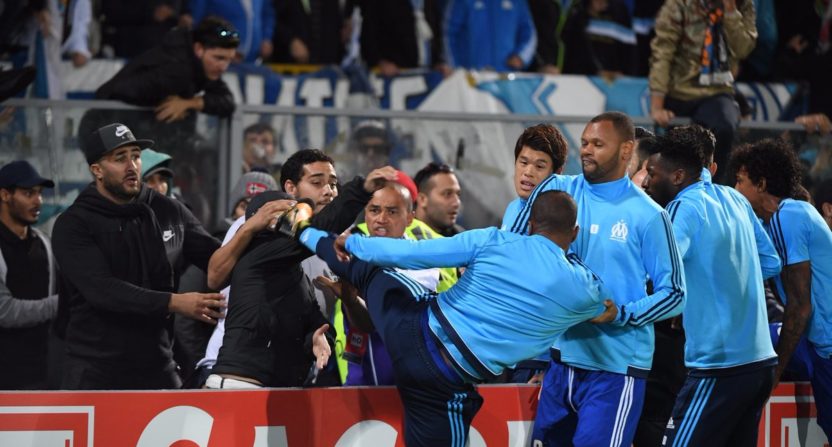 Patrice Evra conjured memories of Eric Cantona after being sent off for aiming a kick at a Marseille supporter before his side’s Europa League game at Vitoria de Guimaraes.

The Frenchman was ushered away by a team-mate but not before creating history as the first player to be sent off in a Europa League match before kick-off.

Marseille, who then also had Boubacar Kamara dismissed during the match proper, went down 1-0 in what would be their second defeat in the Group I.

The incident occurred as tempers flared during the pre-match warm-up for the Europa League game between Vitoria Guimaraes and Marseille, which saw supporters and players clashing.

Pictures and video footage appeared to show the Evra, 36, kicking a fan in the head at the side of the pitch in Portugal with the former French International appearing to lash out at one of his own club’s fans as supporters reached the advertising hoardings at the Estadio D Afonso Henriques in Guimaraes.

The ugly incident was reminiscent of Evra’s French compatriot Eric Cantona, whose infamous kung-fu kick at Selhurst Park in 1995 when the Manchester United player was sent off for attacking the Crystal Palace supporter Matthew Simmons.

Cantona was banned for nine months by the Football Association for the incident, after leaving the pitch following a red card.

Likewise, Evra would now face a lengthy UEFA ban while his future at Marseille will come under fierce scrutiny in the coming days, with club coach Rudi Garcia disclaiming his actions.

“Pat has experience and he must not react, it’s obvious” he said.

“Patrice is a more than experienced player and we cannot respond to insults so low and so incredible because they come from one of our supporters. He must learn to keep his cool.”