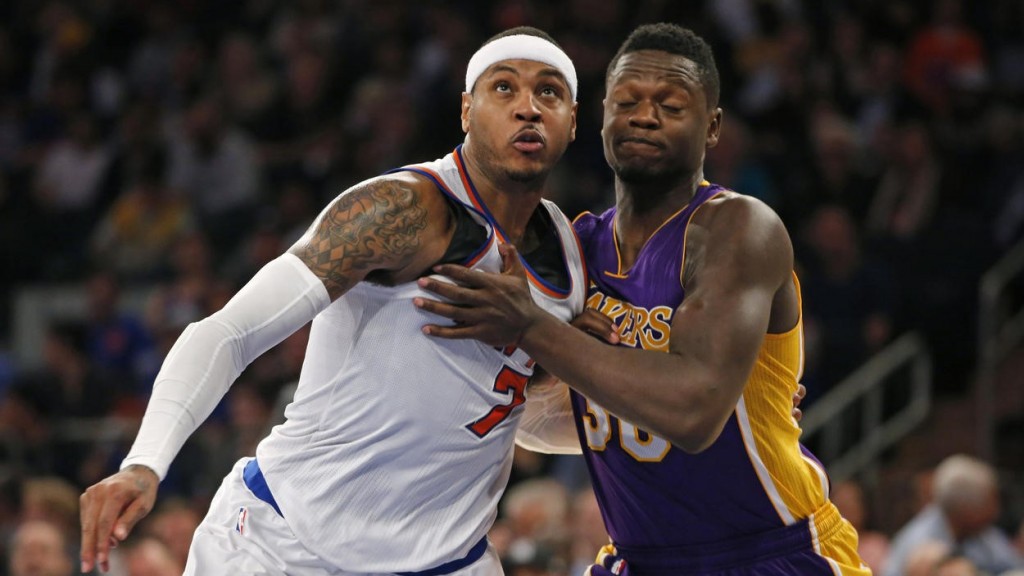 This marks the fifth consecutive loss for the Lakers in the arena.

The New York Knicks beat the Lakers, 99-95, behind a late surge Sunday at Madison Square Garden.

And what a close game it was.

The Knicks only won by scoring 11 consecutive points after the Lakers took a 90-87 lead on a Kobe Bryant free throw with 3:02 to play, and thus denied the 100-point mark.

Bryant finished with 18 points but made only six of 19 shots (31.6%) in what could be his final game at Madison Square Garden.

The NBA star shared a lengthy embrace with Carmelo Anthony and made his way toward the exit, tapping his chest and waving to the fans.

It was not one day before that Anthony claims his close friend (Bryant) would never leave the Lakers, dousing cold water on rumours regarding a potential transfer for Bryant to New York.

Either way, Bryant got the cheers but not the victory in what might have been his last game at Madison Square Garden, as the New York Knicks beat the Los Angeles Lakers 99-95 on Sunday.

He already loved the place even before scoring his first point in the NBA here nearly two decades ago, and the only thing that’s changed now is how much the fans love him back.

In another relatively low-scoring match-up, Miami Heat trumps the Raptors at a 20-point margin.

Three very different dunks, part of a 12-0 fourth-quarter run that helped the Heat put away the Toronto Raptors 96-76 Sunday at AmericanAirlines Arena.

First it was Tyler Johnson rekindling memories of his YouTube celebrity during summer league two years ago. Then it was Josh McRoberts playing at heights Josh McRoberts rarely ventures. And then it was Justise Winslow with about as unemotional a slam as you will find, because the kid’s pulse is somewhere down there near his age.

Each of the aforementioned dunks came off scrappy defensive stands that came across as borderline harassment. And while Chris Bosh was along for the ride during the decisive stretch, still having never lost to his former team on his home floor, this was about Johnson, Winslow, McRoberts and Mario Chalmers.

The energy of the second unit was supposed to come from Gerald Green, but that emotion has left the building for what remain undisclosed reasons.

For all the preseason talk of the Heat’s starting lineup, it is the depth that ultimately could make the difference, and certainly did at the start of this seven-game homestand.