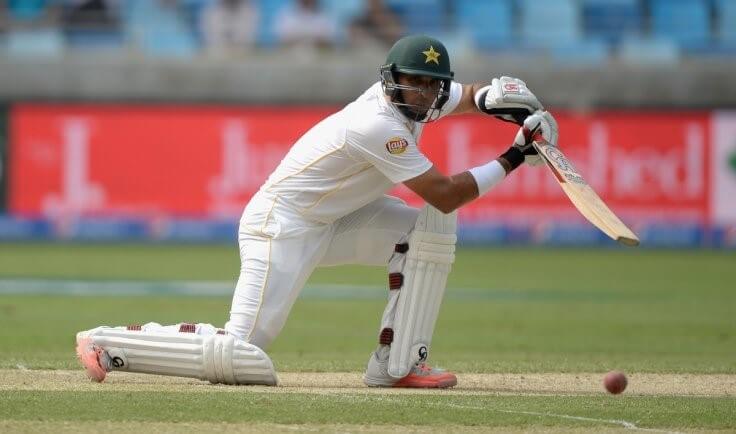 England: Yet to bat

A hundred from Pakistan captain Misbah-ul-Haq seized the initiative after England threatened to take control of the second Test on day one in Dubai.

A disciplined bowling performance had earlier seen Pakistan reduced to 178-4.

James Anderson, Moeen, Mark Wood and Ben Stokes took a wicket each, while Shan Masood (54) and Younus Khan (56) made half-centuries.

Misbah averages more than 57 with the bat as Pakistan captain, but may have felt in debt to his side after a rash stroke in the first Test sparked a collapse that set up England’s unlikely push for victory.

He initially looked uncomfortable against England’s pace bowlers and was hit on the head by a Wood bouncer, as well as edging Stokes just short of the slips.

But he swept the spin of Moeen and Adil Rashid with aplomb as well as hitting the inconsistent Rashid for three straight sixes.

England can be pleased with their effort on a surface that holds few problems for batsmen, but one that has offered more encouragement for the pace bowlers than the drawn first Test in Abu Dhabi.

Just as they did in Dubai, England’s quartet of pace bowlers impressed with both a constant wicket threat and the ability to keep Pakistan’s batsmen in check.

After Moeen had opener Mohammad Hafeez loop an inside-edge to short leg, Stokes got Shoaib Malik to push in the same direction, where Jonny Bairstow took a brilliant one-handed catch to grab a rebound off his own chest.

Anderson rolled his fingers over an off-cutter from the very first delivery after lunch to have Masood poking behind, while Stokes and Wood caused problems during a fourth-wicket stand of 93 between Misbah and Younus.

Stokes, described as “not 100% fit” by captain Alastair Cook following a stomach virus, found reverse swing in the air and movement off the seam, while the hostile Wood was eventually rewarded when Younus was caught down the leg side.