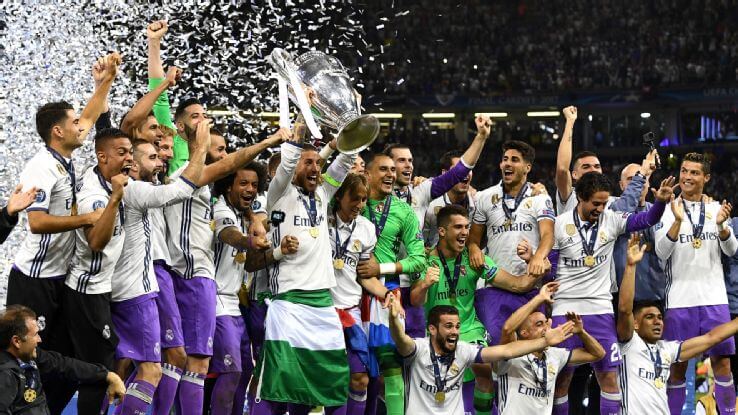 Real Madrid became the first team to successfully retain the Champions League title as Los Blancos overwhelmed Juventus in the final at Cardiff by 4-1.

It was also Real’s record 12th European top-tier victory — and third in four seasons, thanks to an almost routine performance by their star man Cristiano Ronaldo, who also became the first player ever to score in three separate Champions League finals.

While Juventus started brilliantly with clever runs and threatening plays, Ronaldo scored despite their run of play be sweeping in Dani Carvajal’s pass after 20 minutes, although Mario Mandzukic levelled with one of the most brilliant of Champions League final goals with an overhead kick beyond Real goalkeeper Keylor Navas.

But the equalizer would prove to amount to little as Real suddenly became unstoppable after the break, restoring their lead through Casemiro’s deflected shot before Ronaldo scored at the near post from a cross by the outstanding Luka Modric — in the space of three minutes .

The Bianconeri were dealt a further blow as substitute Juan Cuadrado was sent off for a second yellow following a clash with Sergio Ramos, and the rest passed with little to note before substitute Marco Asensio completed a precise finish in the last minute for an emphatic Real victory.

It also meant that this season, under the leadership of Zinedine Zidane, Real Madrid has back-to-back Champions Leagues — the first European club to do so — while also bringing the La Liga title, the FIFA Club World Cup and the UEFA Super Cup to the trophy cupboards of the Bernabeu.

“I feel like dancing,” he said after the win. “I consider myself a man of this house (Real Madrid). This club is really in my heart and we are going to enjoy this. Today is a truly historic day for Real Madrid, for all Madrid fans.”