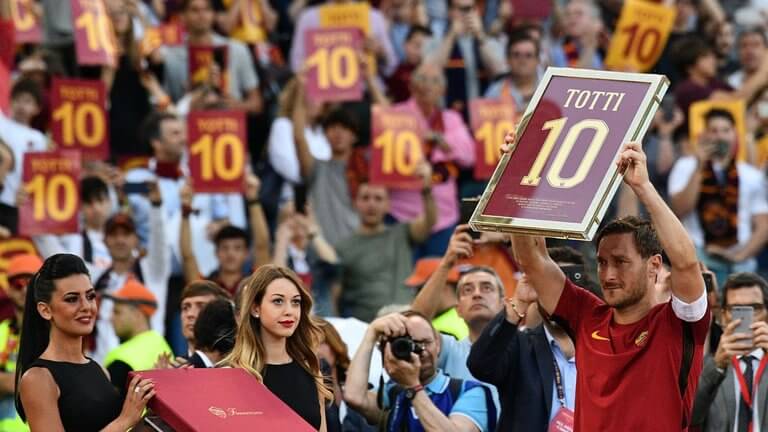 Glitter was added to Francesco Totti’s last game in a Roma jersey as his team secured Champions League game time next season in their final Serie A match this season.

The club legend played his final match with Roma after 25 years with the club, a game which ended in fervent celebration when the Giallorossi scored a 90th-minute goal for a 3-2 win over Genoa that also secured a spot in next season’s Champions League.

However, things did not go to plan for Roma as Genoa went off the script with 16-year-old Pietro Pellegri becoming the youngest player ever to score in Serie A when he put Genoa ahead three minutes in.

The crowd, which had saluted Totti before kickoff, was quickly silenced.

Relief came and the cheers were heard again as Edin Dzeko equalised for Roma in the 10th minute, and the team’s future captain Daniele De Rossi appeared to have the winner in the 74th, only for Darko Lazovic to equalise for Genoa five minutes later.

Diego Perotti’s then scored in the last-minute for Roma’s winner.

“When you coach a squad like Roma you’ve got to always have victory as the goal and sometimes second place isn’t acceptable for some people,” Roma coach Luciano Spalletti said.

“But this second place is a huge accomplishment. We had to obtain this result and today, particularly, the squad really deserves it for how the match developed.”

Spalletti is also now expected to leave the club after having regularly brought Totti on as a late substitute this season. He also complained before the game for being painted by the media as being confrontational towards the player.

Sunday’s match was the the first time Totti played more than 30 minutes in a Serie A game since September as he entered the game as a substitute for Mohamed Salah.

“Totti has won a great deal but he alone is not enough and he knows that,” Spalleti added. “Of course, you will take all this and make it look as if I’m angry with Totti. I use the principle of you and me, but you turn it into ‘Totti and me.’”