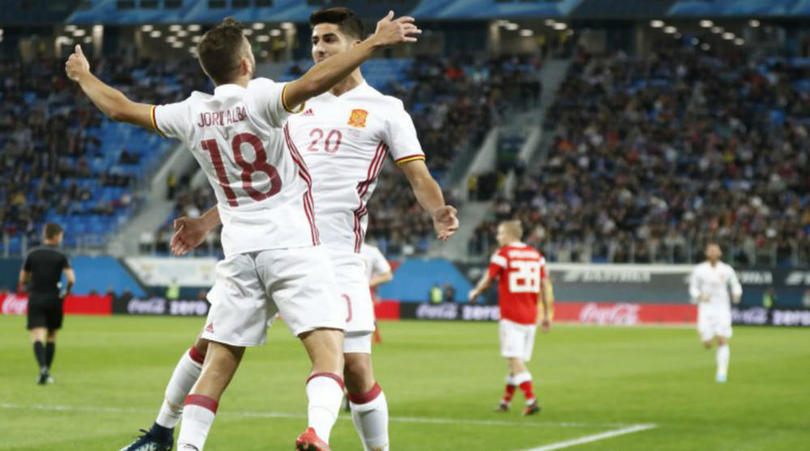 Russia rallied from two goals down to draw 3-3 with Spain in an international friendly encounter at St Petersburg, with Sergio Ramos converting two penalties.

The hosts found themselves trailing just after 30 minutes, with Jordi Alba turning in a cross from Marco Asensio to put the visitors ahead after nine minutes before Ramos doubled the lead from the spot after Daler Kuzyaev’s handball.

An exciting first half with plenty of offensive maneuvers from both sides then saw Russia halving Spain’s lead. At the 41st minute, Fedor Smolov emphatically finished as he shaped to shoot and fooled a defender before smashing a left-footed effort into the bottom-right corner from 18 yards.

The World Cup hosts then equalised five minutes into the second half thanks to Aleksey Miranchuk, who puts the ball past David de Gea from close range after good work on the left by Yuri Zhirkov.

However, his team were not level for long — it was just three minutes after their equalizer that poor defending quickly saw Ramos winning another penalty and subsequently converting it with aplomb.

Russia chose to bring more men forward and it rewarded them as they found their second equalizer 20 minutes from time, as Smolov sent a fierce long-range effort into the top-left corner to set up a tantalising finish that ultimately saw the teams end on level terms.

Smolov could have had a hat-trick for the impressive hosts but both him and Aleksandr Kokorin were denied near the end by David de Gea.

A nasty collision between Rodrigo and Andrey Lunev resulted in the Russian goalkeeper being withdrawn late on, forcing Denis Glushakov to go in goal for the final moments due to all of their substitutions being made, but Spain failed to capitalise and the hosts held out for a draw.

Still, the result extended Spain’s unbeaten run this year to 10 games — although this was the first time they conceded more than two goals since they lost 5-1 to the Netherlands in the opening game of the 2014 World Cup.