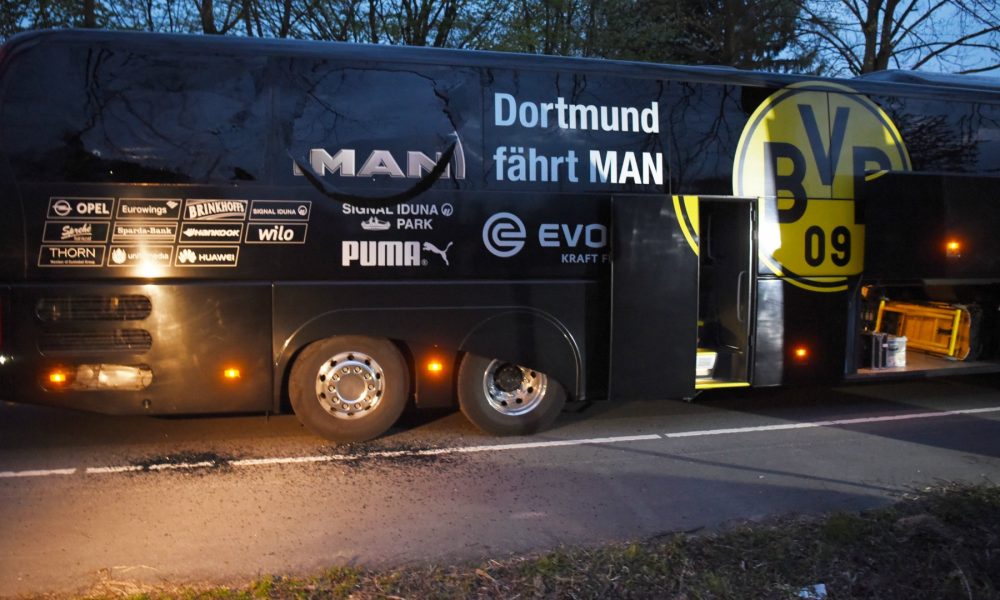 Three explosive devices went off by the side of the bus carrying the Borussia Dortmund team, injuring one player.

The incident occurred in approximately six miles (10km) from the club’s stadium, where they were due to play a Champions League quarter-final match against AS Monaco. Three explosions near the bus broke some of the vehicle’s windows.

During the incident, defender Marc Bartra was injured by shards of glass and was taken to hospital. He will be undergoing surgery on his injured arm to repair a fracture and remove shrapnel.

The remaining players were escorted from the coach by police, who also used drones and sniffer dogs to search for further explosives.

A spokesman later informed a press conference they were treating the incident as a “targeted attack on Borussia Dortmund’s team” and said a fourth, undetonated device was found in the vicinity of the team hotel.

Police also revealed they had discovered a letter near the scene of the crime which contained a claim of responsibility for the attack and were trying to authenticate it.

Hans-Joachim Watzke, chief executive of Borussia Dortmund said that the vehicle carrying the players had only just left their hotel and turned on to the road where the explosive devices were hidden behind a hedge.

“Bartra was injured, on his hand and his arm, but nothing that would be life-threatening,” he said. “The team is in complete shock. Our task is to process this experience, because the match is taking place in less than 24 hours. That’s our job.”

Dortmund also confirmed that as a result of the incident, the quarter-final match will be postponed for a day. The other Champions League fixture on the day, played between Barcelona and Juventus went ahead without delay.

Watzke said that busy schedules for both teams had made it impossible to postpone the match for more than a day, a fact he described as “unfortunate”.