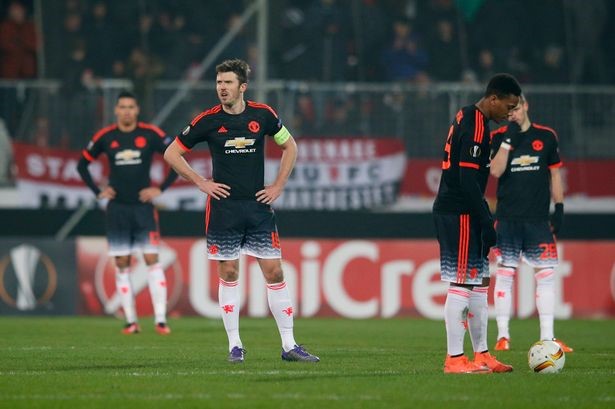 Manchester United’s tally of losses this season is extended yet again after their defeat by FC Midtjylland at 2-1 in the first leg of their Europe League last-32 tie.

The visitors were coming off another 2-1 loss at the hands of Sunderland last weekend, and travelled to the MCH Arena without Wayne Rooney. The team also lost goalkeeper David De Gea during warm-up.

Still, the Red Devils managed to take the lead through a Memphis Depay shot – only to be equalized by a Pione Sisto effort. Romero, De Gea’s replacement was unable to keep it out.

Then Paul Onuachu scored the winner at 77 minutes, giving the Danish side a record win coupled with the fact that the club’s last competitive match was 71 days ago.

Being sixth place in the Premier League also meant that United had little hopes of qualifying for the Champions League next season. Winning the Europa League represents the best chance to fill their empty trophy cupboard and retain a place in Europe’s elite club competition.

The team is going to need to do more than performing well in their second leg to do so.

Comparatively, Liverpool may not have won their fixture against German side FC Ausburg, but they had better fortunes compared to United as they managed a goalless draw.

The Reds performed better marginally in what was a lengthy match, with clear chances in the first half from striker Daniel Sturridge and Roberto Firmino being saved from Ausburg keeper Marwin Hitz.

The visitors appeared more intent on scoring after the break and would have opened the scoreboard if not for Surridge’s near miss at close range.

On the other hand, Ausburg’s Ji Dong-Won came close to scoring as his effort hits the woodwork, while Kostas Stafylidis found space in the box but poked wide.