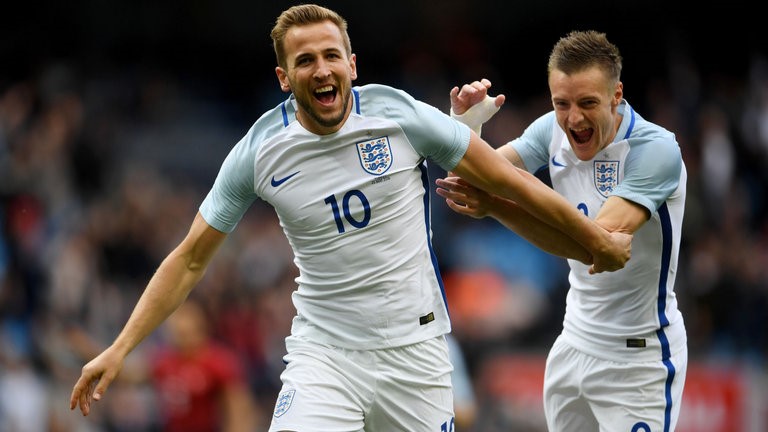 Jamie Vardy and Harry Kane proved that England’s offensive strength is on point going into Euro 2016 as both scored a goal in England’s 2-1 win over Turkey.

Tottenham’s Kane provided the perfect start within 3 minutes, linking up well with club teammate Dele Alli for a cold finishing after four minutes albeit from an offside position.

Although Danny Rose had won the official man-of-the-match award, England’s newly appointed left-back was at fault. He was caught out as keeper Joe Hart made a poor decision to dash off his goalline to try to charge down the cross from Volkan Sen.

The goal was left exposed and Hakan Calhanoglu was in the centre to turn in Sen’s right-sided delivery.

Jamie Vardy then made amends for a missed penalty from Harry Kane.

Kane himself swung a corner from the right. Gary Cahill’s header came back off Ismail Koybasi, who had been guarding his near post. However, the Turkish substitute also managed to impede his goalkeeper in the process and Vardy turned in the rebound.

Though his team is a joy to watch in their attack, Roy Hodgson would still celebrate the win cautiously as England continued to unravel defensively, failing to get a clean sheet in 3 matches. It was only by Joe Hart’s brilliant reaction save from Olcay Sahan that Turkey did not equalize in injury time.

The Three Lions also feared the worse as Volkan Sen got behind their defence and crossed for Hakan Calhanoglu to equalise soon after Kane’s early strike, and Turkey had further chances before England’s late show.

Indeed, the focus of the team’s positive was their strength in attack. This was especially after Hodgson adjusted his formation to give Vardy a more central role in the final half-hour.