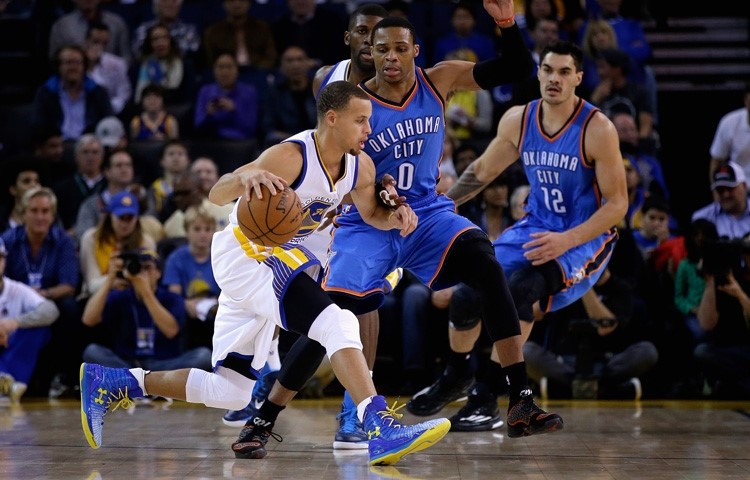 Clinching another feather for their already down-filled hat, the Golden State Warriors breaks yet another record by tying the Bulls’ 96 record of a 44 home wins streak, beating the Oklahoma City Thunders by 121-106 at the Oracle Arena in Oakland.

MVP Steph Curry, recently named the Kia NBA Western Conference Player of the Month for his February performance scores 33 point and goes five for fifteen from long range in what was a rematch of last week’s epic.

The Warriors were trailing 80-71 to the Thunders playing the back-half of a back-to back. Taking control of the game, Golden State cuts their gap to one and lead during the fourth, scoring the first seven points thanks to a Marreese Speights 3-pointer and a firm game from Shaun Livingston.

They immediately widened the gap when the starters returned, pushing up to 106-97 with Curry’s 3-point play with little more than 4 minutes left. Andrew Bogut then managed to steal the ball from Kevin Durant which then led to a dunk by Thompson, making it a 12-point gap.

Showing few effects after being rested for a sprained ankle, Curry beat Durant with a crossover for his first basket, and hits two 3-pointers in the first quarter to extend his streak to 130 straight games with a 3.